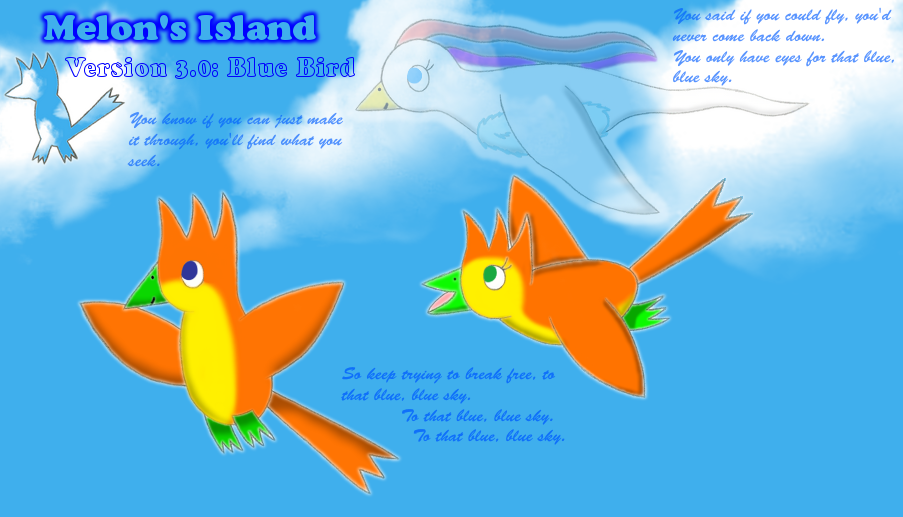 To Melon's Island, the site that is all about my old but renewed story called Melon's Adventures.This story is about a bird named Melon that is given electric powers to fight off evil from a mysterious bird called 'The Goddess Creature'. Melon goes on a quest, along with the creature to fight evil and to find out what happened to the rest of her species that suddenly disappeared. Filled with a lot of adventures and action scenes, as Melon faces many villains along her quest, and wants answers on what happened to the other Tropical Birds.

The Layout
With most future layouts, I already had the ideas for this layout on that very secret page of Melon's Island. Like two of my other sites MPS and SHHB I created special layouts that I like to call music themed layouts and ended up planing all of MI's version 3 layouts to be that way starting with 3.0 - 3.3. This layout is based on the 3rd Naruto Shippuden opening called Blue Bird. With the song having 'bird' in the title, it made me think of Melon's Adventures, which gave me ideas to make this layout. The lyrics come from the tv size version of the opening and I added that small picture of Melon on the left side since there's a bird in the opening that only has the outline drawn but the inside is the sky, which I think is neat ^^ So, I did a Melon version of that bird :3 Adding those text bird symbols beside the pages and in the tab header thingy was a must since the layout is called Blue Bird.

I used a different style artistic style than the usual by first drawing circles for each of their heads and then adding the details like their beaks. All of the poses are different except for Aaron's, which is based on that one picture of Melon. I tried using a different way to Photoshop by outlining everything in a black colored pencil instead of an ink pen but this way failed epically when I tried coloring it in on Adobe Photoshop Elements 7 but luckily Gimp 2.6 gave me a better way to color digital this way but coloring this in that program I had to Feather the edges, if I didn't then the edges would come out blocky D: and I defiantly didn't want that to happen. Then my shading abilities on Gimp aren't that great but it is decent. I colored in The Goddess Creature separately so she could be transparent for the fact that she's watching over Melon (in secret, which she doesn't know) and found a new way to add her white aura :D I downloaded a set of cloud brushes on Gimp since they're flying happily in the sky :) Since there is a lake in the Naruto opening with grass and trees around it, I added an image which connects with the banner. Even though trees are involved I only added the grass to make it easier, which has been done in Photoshop. I even added the grass brush to a small part of the three borders to make it look better :3 The blue background below the grass identifies the bottom of the lake and I made it gradient since I preferred to not change the font color of the navigation headers (since they couldn't be seen) for the sake of the lake being blue so most of the layout's content/navigation background is sky blue.

The Splash
Instead of the splash page having a similar style to the layout, I instead based it on the 5th Naruto Shippuden ending called Gentle Rainbow, though I thought of making a layout of this at first but the idea I have isn't as big as using Blue Bird. The whole splash is filled with rainbows since the song is called Gentle Rainbow. I even found a way to make rainbow text and a rainbow background! Added text shadow to all of the text since it would be even harder to see what it says past the rainbow background. When I knew I could have a rainbow background and rainbow text, I couldn't resist XD I even separated the splash image from the enter text so I could have rainbow text there too since I can't find a way to make rainbow colored text in Gimp or any other editing program :/ So, the text itself doesn't have a link to the home page, only the image and the 'Click Here' does.