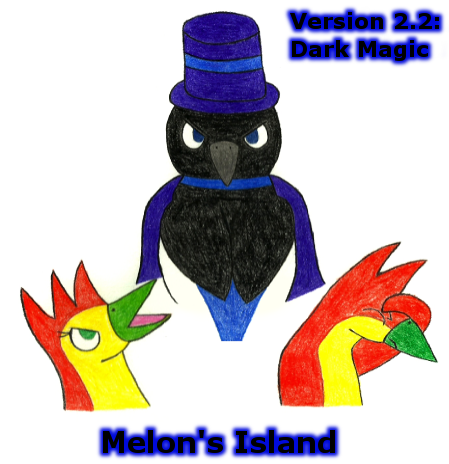 To Melon's Island, the site that is all about my old but renewed story called Melon's Adventures.This story is about a bird named Melon that is given electric powers to fight off evil from a mysterious bird called 'The Goddess Creature'. Melon goes on a quest, along with the creature to fight evil and to find out what happened to the rest of her species that suddenly disappeared. Filled with a lot of adventures and action scenes, as Melon faces many villains along her quest, and wants answers on what happened to the other Tropical Birds.

Based on Chapter 2: Dark Magic that features the new villain named Set which this layout is also based on him. The key colors are blue and different shades of blue for the fact that Set's magic is blue, I also used white for most of the text. This layout is made up of boxes, one for the navigation, one for Other Sites and Status, a big one for the content, and a added addition; Current Moon Phrase which shows the phrases of the moon :D Since Aaron transforms during the full moon I decided to add it :3 The boxes are transparent so you can see the dark cloud background image behind it 8D which at first I only used it on a upcoming Spat layout for another site but then thought that this background would suit Set as well since it has blue in it. The pages links are between a text symbol that looks like a diamond, though at first I was going with the star. Worked on everything except the banner in December.

Since I had an idea to include three characters to the banner; Melon, Aaron and Set I really didn't want to draw them all in ms paint like I did with Melon and Canaku in the previous layout so I tried drawing them traditionally, with a mechanical pencil and colored pencils. I got into a new colored pencils style and wanted to use it for Melon's Island, so I did and it came out very nice :D even though it was a lot of work but I got through it. I then made the drawing's background transparent with a new technique in Adobe Photoshop Elements 7 that makes pictures have that sticker like style which I first did for a Spat drawing. I used the same text effect which makes the text glow for this layout as I did for the previous one except used it on the layout title as well. That effect can be done on Gimp and is called Glowing Text. The picture shows Set, placing the curse on poor Aaron D: who is holding his head in pain from the attack. Though Melon wasn't there when Set used this power to curse Aaron, so this was only done for the sake of the layout. Besides, what's a Melon's Island layout without a Melon :P

A few mistakes where made during the images for this layout. These are it:

Oh well, I'll try to get this kind of stuff right next time.